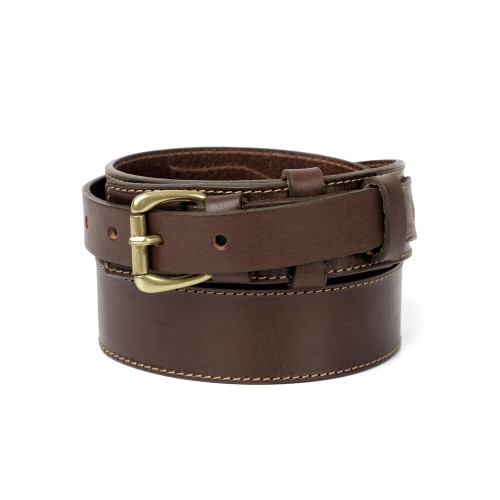 Inspired by the men that tamed the Texas frontier, our Ranger Belt was made to be as rugged yet sophisticated as they were. We'd love to say we invented the Ranger Belt, but it's been around longer than most any of us.


The design was implemented from a cinching technique used in horse tack that allows a strap to be tightened without pinching the horse's hair in the buckle. The Texas Rangers adapted this technique into the design of a belt in the 1840s, when they began using the new Colt Walker six-shooter, a substantially sized firearm which demanded larger holsters and thus wider cuts of leather than standard belts. By mimicking the cinching technique from horse tack in the design of the ranger belt, the Rangers could wear a smaller, more functional belt and still holster the larger sidearm. Consequently, this style of two-layered leather belt is named after the Texas Rangers.


Belt measurements are measured from the middle hole to the end of the buckle. This will allow two additional adjustment holes (smaller or larger) on either side of the middle hole :