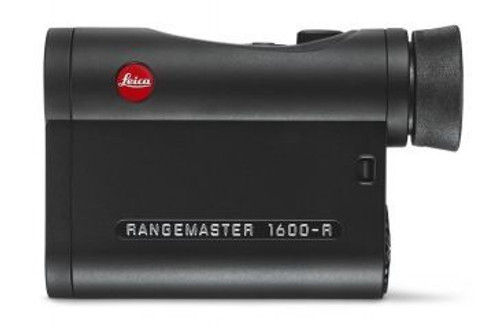 With the Leica Rangemaster CRF 1600-R, Leica Camera AG (Wetzlar) presents a new laser rangefinder that now replaces the successful Leica Rangemaster CRF 1000-R. Its versatility, compact size and essential ballistic functions make the CRF 1600-R and its expanded technical features the ideal model for hunters who attach importance to reliable distance measurement and the determination of the equivalent horizontal range. The CRF 1600-R measures and displays linear distances from 10 metres/yards to a maximum range of 1425 metres/1600 yards. In addition, it can also take the angle of elevation or depression into account and display the hunting-relevant equivalent horizontal range for distances up to 1100 metres / 1200 yards. This means that the Leica Rangemaster CRF 1600-R provides the decisive data its user needs for ethically correct and precise shots. In addition to its measuring precision, the Leica Rangemaster CRF 1600-R also features high-performance 7x24 mm precision optics with integrated dioptre compensation. What’s more, the rangefinder offers a wide field of view for fast and easy target identification. The 7x magnification ensures a very bright and steady view and makes the CRF 1600-R an extremely dependable instrument, even in poor light and limited visibility. Its further improved LED readout with automatic brightness correction displays the determined values with optimum brightness and clarity in any conditions. The design and handling of the Leica Rangemaster CRF 1600-R have been ideally adapted to the needs of its users. With its compact and ergonomic form and a weight of only 180 grammes, the instrument can be held with ease in either hand and offers intuitive handling. Die Leica AquaDura® coating of the exposed lens surfaces lets dirt and water droplets just roll away and makes them particularly easy to clean. Built-in dioptre compensation and special rubber eyecups make the Rangemaster ideal for use by spectacle wearers. The Leica Rangemaster CRF 1600-R comes complete with a carrying strap, a Cordura case and a battery.