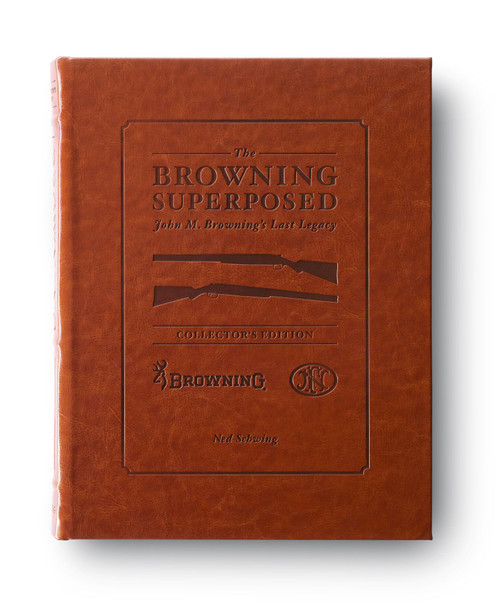 Houston, TX – 24 years ago, the history of the Browning Company from 1926 to 1995 was told in great detail for the first time. From its financial history to its corporate personalities, The Browning Superposed: John M. Browning’s Last Legacy was a story written by firearms historian, Ned Schwing, about the gun and the companies and men who made it. In Spring 2020, a limited number of this amazing work will be released as a beautifully crafted Collector’s Edition with an introduction by Browning Superposed shotgun collector Jim Hendricks, and a new chapter dedicated to the modern-day Browning company by Marcus Janssen. This limited-edition book will feature a branded leather cover, premium-grade paper, stunning design, and over 650 photographs that visually walk you through the history of the Browning Superposed shotgun. Rarely has one gun changed the face of the firearms industry. Even more uncommon is a gun that changes the way you think about firearms. John Browning’s gun did both. As the all-time best-selling over and under shotgun in North America, the Browning Superposed is rich in tradition and unsurpassed in quality craftsmanship. Ned Schwing penetrates the mystique surrounding the Browning Superposed, bringing to light the history behind the last of the high quality, hand-built, and hand-engraved over and under shotguns. Whether you are a Browning Superposed collector, or a hunter who enjoys the look and handling qualities of this great shotgun in the field, or even a trap or skeet shooter who uses the Superposed in competition, this book will bring hours of enjoyment looking back to the glory days of this time-tested firearm. You’ll understand how the Superposed was finally put into production by John Browning’s son, Val, and you’ll sift through the past seventy years’ worth of records, drawings, and data of the premier gun company of our time. Included are seventy-eight clear and concise tables and charts analyzing the Browning Superposed by year from 1931 to 1984. Through official sales records of the Superposed, learn how they were made and sold by gauge, model, grade, barrel length, and more. The book features: - A new Introduction by Browning Superposed shotgun collector Jim Hendricks - A new chapter dedicated to the modern-day Browning company by Marcus Janssen - A foreword by former Browning president Don Gobel - An inside look at the Browning Company’s records - A walk through the Fabrique Nationale photo archives, providing you with photography of one-of-a-kind Superposed guns, including:. - The first Superposed prototype - The first 20 gauge prototype - The one and only 16 gauge prototype - The one and only .410 bore frame - Specifically engraved Superposed made for only Browning family members This is your greatest gun discovery yet.